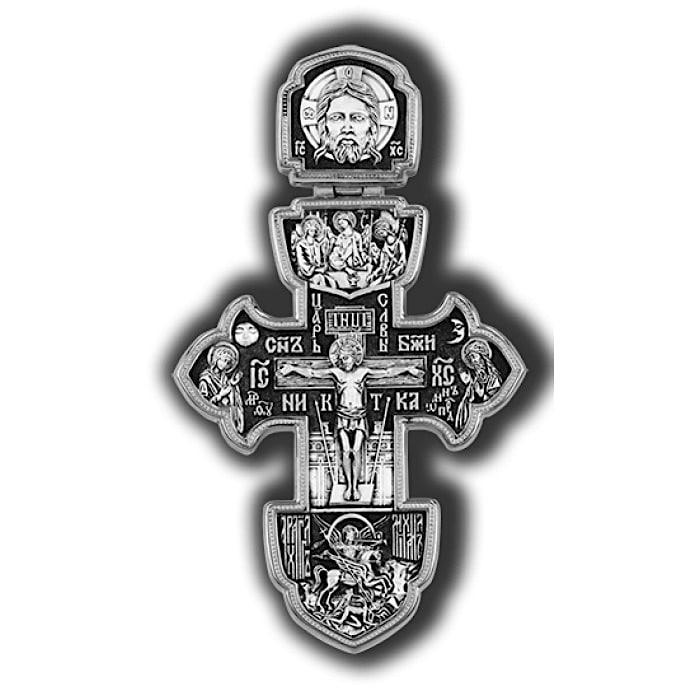 On the obverse of the cross is the Crucifixion of our Lord Jesus Christ. The Holy Mother of God and the Prophet John the Baptist, the Baptist of the Lord, are standing on His side in the Deesis (prayer for the people) on both sides. Top — Holy Trinity. This is the image of the Triune God, who appeared in the form of the three angels to the forefather Abraham. On the ear is placed the Hand-to-hand image of the Savior, one of the most powerful protective symbols of Orthodoxy. On the bottom stamp — the image of the Archangel Michael. The Archangel of the Heavenly host leads an implacable war against the forces of evil, protects the gates of paradise and protects the souls of men. On the reverse side of the cross — a short prayer addressed to the Lord: “Save and keep” and the prayer to the Life-giving Cross of the Lord: “We bow to Your Cross, Vladyka, and glorify Your Holy Resurrection. The lower stamp depicts the Holy Prince Alexander Nevsky, who is revered as a defender of Orthodox Christians and a patron of warriors. In the top of the cross we see an anchor, the oldest Christian symbol of hope and salvation. The very shape of the cross is also made in the form of an anchor.

This product was consecrated on the particles of the relics of St. George the Victorious.