Meaning of “spare the rod, spoil the child” in Sacred Texts. 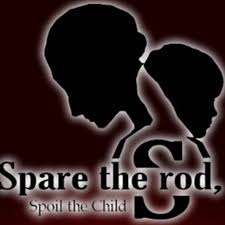 This phrase means that it is necessary to punish the child if he (she) refuses to obey certain rules. The absence of punishment results in the gradual spoiling of the child. The Sacred Texts say that the punishment for misbehavior is a true love of the father for his son, while the opposite is hate for the child. In the absence of punishment, the child will not understand that for every sin, there’s atonement. Parents must show their love for the child so he (she) can become closer to Jesus Christ and earn his forgiveness. Punishment should open the child’s eyes to his wrong actions and show him (her) the right path. Punishment highlights the nature of a person who tends to commit misdeeds and be responsible for everything that happens in life. A human being is an insignificant creature. The meaning of his existence is to glorify God and build his life in such a way as not to discredit his greatness.

The upbringing is one of the most important parts of the life of any person who follows the righteous path. When creating a new life, a Mother and a Father take the responsibility to lead their child to Jesus Christ. In Proverbs, it is stated that “it is not necessary to refrain from punishing a child”, and that this will only lead to a good result. A boy (or a girl) will understand the importance of the words of his (her) parents and will ask Christ for salvation, which is the righteous path.

Why do children need to be punished for misbehavior?

Sacred Texts say that all children have inherent sinfulness but this does not mean that they should be neglected. Punishment for each misconduct will help “heal” the kid and direct him onto the right path. A child who has not received enough punishment will grow up to be a fool who does not understand how life works and why it is necessary to believe in God and be faithful all the time. A baby who constantly received punishment for his bad deeds will turn into a real sage who will follow all the precepts and will believe in Jesus Christ as the Great Savior.

It is also important to note that the Sacred Texts tell about a small physical punishment as a means of a child’s upbringing. The texts use a “thin rod” to describe it as a means of punishment (it does not cause serious injury, and the child will not be bruised or have other wounds). It should also be noted that Sacred Texts are against a more painful punishment, as this would be considered an abuse of power (and, accordingly, a sin). Corporal punishment is a manifestation of love and compassion, which parents show for their children. This must be remembered in order not to turn upbringing into an act of superiority over a weak being.

In addition, there are several reasons why you should adopt this practice:

God brings up his children using this way;

Lord preaches the same parenting methods that parents should have.

Sacred Texts say that God only punishes His beloved children, which is what all Christians are.

In conclusion, we can say that punishing your child is a righteous action (it is a manifestation of love for your child). After all, this discipline will allow the child to choose the right direction and follow it on the path to Jesus Christ, who will free him from torment. It is important that children learn to correctly understand the consequences of their actions for themselves and those around them.

Also, it should be noted that discipline must have a limit. Extreme punishment will lead to big troubles and not to God’s Salvation.

Raising children by punishing them for their misconduct leads to the blessing of not only the child himself (herself) but also his (her) parents, who took this responsibility.