The Icon of St. Spyridon Trimythous 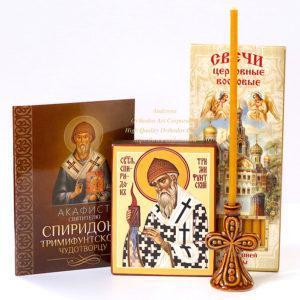 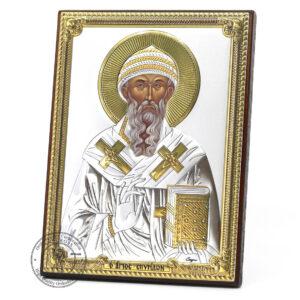 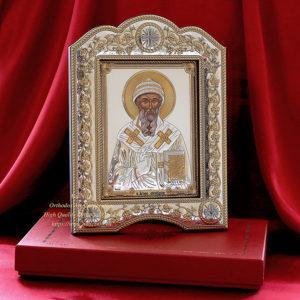 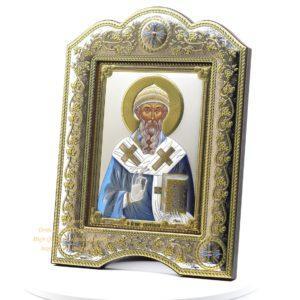 Icon of the St. Spyridon, Bishop of Trimythous

Believers really often turn to Saint Spyridon for help. He helps to solve various financial issues (improve the financial situation, create your own business or develop an existing one), find a nice job. He is also revered as a healer who relieves severe pain and helps with very complex ailments, incurable diseases.

Silver icon of the Saint Spyridon, Bishop of Trimythous in our store

Orthodox believers greatly honor this saint. We sell a handmade icon with his image. This miraculous icon is an exact copy of the image made by Byzantine craftsmen. A classic colour palette is used for icon painting. The base is made of brown MDF by high European quality standards. The icon is coated with a high-quality silver coating using PVD (Physical Vapour Deposition) technology – applying a thin metal coating in a vacuum under high pressure. The coating is very resistant, durable, protects well from scratches. It uses silver of the highest 999 grade. High-quality workmanship ensures that the image will remain unchanged for a long time.

The icon is packed in a gift box. It was made in the European Union by order of Orthodox Art Corporation And cross.

Biography of the Saint Spyridon of Trimythous

The saint lived at the end of the 3rd – beginning of the 4th century in Cyprus. He was born around 270 in the small village of Asia in Cyprus. He lived according to the instructions of the Old Testament righteous. He was distinguished by kindness, responsiveness, but at the same time by fair severity to unworthy people. He was elected bishop of Trimythous. He is known for his miraculous deeds. After his prayer, the long drought stopped, he also saved people from hunger and poverty, helped a falsely accused friend escape execution, resurrected the dead, healed the seriously ill (including Emperor Constantius). He brought many of the Arians back to the true faith. He led a very simple, ascetic lifestyle, did not consider it shameful to herd sheep. He called people to repentance and correction. Spyridon died around the year 348, during prayer.

What deeds is the Saint Spyridon known for

This saint is known for his miraculous deeds during his lifetime and even now continues to help the suffering who turn to the image of Saint Spyridon with prayer. It is not necessary to memorize the words of prayer, you can ask the saint for help in your own words. The main thing is that they are sincere and come from the heart.

What miracles he did:

Saint Spyridon. How the Relics of the Saint Are Venerated

Saint Spyridon is one of the most revered saints in Christianity. By the grace of God, his relics are miraculous and incorruptible. Besides the fact that the relics of Saint Spyridon have the normal temperature typical for a living person – 36.6°C (97.9°F), they also have not dried up with time and have the weight of an average person.

Four times a year, the clerics change Saint Spyridon’s clothes and, according to them, his skin feels warm and elastic to the touch. The clergymen have a feeling that they just dress up a person in his sleep.

The relics of Saint Spyridon are taken in procession around the Kerkyra island (Corfu) – the final resting place of the saint on the following occasions:

• On August 11 – the day when the island was fully liberated from the Turkish invaders;

• The first Sunday of November.

The procession is accompanied by the performance of the brass band.

But Saint Spyridon himself does not stand aside and sometimes “comes out” to invisibly help the residents of the island to deal with their daily affairs and implement their dreams.

The clerics who take care of the relics say that the shoes of Saint Spyridon are constantly worn out, although they are renewed every year. There are also times when the shrine with relics cannot be opened – one of the keys does not turn in the keyhole. This means that the saint went out to walk and help the residents of Kerkyra.

Spyridon is the most popular name on Kerkyra, many islanders name their children after the saint. Besides the fact that the saint helps his neighbors – the inhabitants of the island where the shrine with the relics is kept, – he also helps all those who need his heavenly protection. The main thing is to ask him for help with goodness and sincerity in your soul, and he will definitely help!

Thousands of pilgrims come to Kerkyra every year to venerate the relics of this great saint!