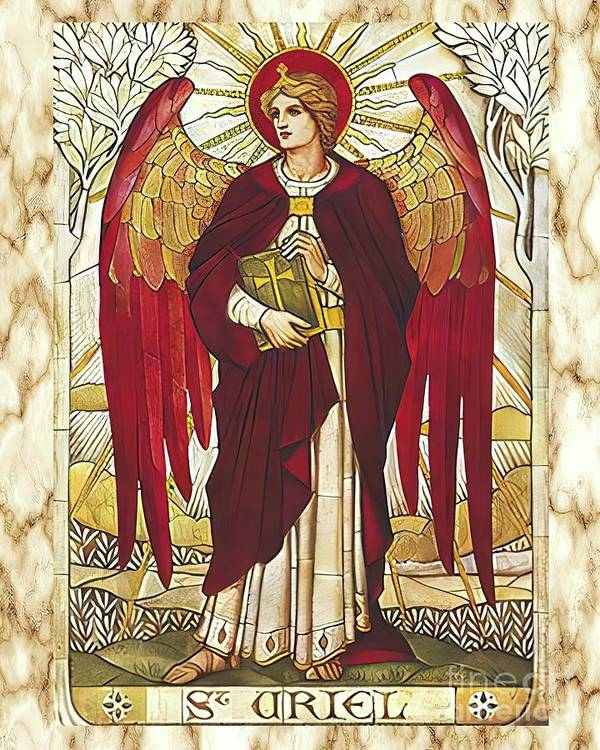 Archangels are chief angels who are in charge of other inhabitants of Heaven. Each Archangel has a special task assigned to him by God. Uriel is one of the highest Angels, his main mission is to patronize scientists.

The name Uriel is translated from Hebrew as “God is light”. If we try to explain it, we can say that God’s light is spirituality, the search for a purpose in life, getting rid of foolishness and lack of education, and the pursuit of knowledge. It means that Uriel is the patron saint of those people who want to find their fate vector and the right path.

Where Uriel is mentioned

Uriel’s name is not mentioned in the Bible, Testaments, and Scripture. However, we can find a lot about him in the Third Book of Ezra. There, the Archangel shows the author his true path. According to this book, Uriel guards the gates of Heaven after Adam and Eve were expelled from Paradise.

Another book tells us about this Archangel. In the book of Enoch, he is called the lord of thunder. Amadeus of Portugal (Joao) Portuguese also writes about Uriel in his work of revelation. After this, Catholics began to worship Uriel. Later, this devotion was reflected by Dmitry Rostovsky in his book The Lives of Saints. Nowadays, there’s no more cult of Uriel in the Catholic Church, despite the fact that it started in this institution.

Muslims don’t believe in Uriel. However, there is Israfil in Islam. His mission is the same as Uriel’s. Unlike Orthodox and Jews, Muslims mention only four angels by their names in literature. The others don’t have names but are divided into groups.

Archangel Uriel can awaken conscience and a sense of repentance in sinners. People pray to him if they want to find the right path in life. St Uriel’s Feast Day is on September 29. On the same day, people also praise and thank Michael, Raphael and Gabriel. Traditionally, he is commemorated on November 21. This date is universal because the bells tolls and praises are sung in honor of all the inhabitants of Heaven.

In Orthodoxy, Uriel is the patron saint of scientists, students and everyone who devotes his life to science and knowledge. He also protects the shrines and churches of Russia. In addition, Baba Vanga mentioned Uriel in one of her prophecies. She said that Russia will become the savior of the world, and Archangel Uriel will call all Orthodox Christians for this.

In the past, Uriel was revered as the patron of the Rurik dynasty, when it ruled Kievan Rus.

By the way, science is not the only sphere under Uriel’s patronage. He can also help to improve relations between subordinate employees and their bosses. He also has the ability to create new things. Creative people can turn to him if they lack inspiration.

How Uriel is depicted

Like all other Archangels, Uriel is depicted as a young man with wings. Youth stands for purity and innocence, and wings are the speed with which the Archangel serves and rushes to help worshippers. In his hands, Uriel holds a sword and a flame. They symbolize that Uriel sheds the light of truth. With his sword, he makes his way, while the fire dispels the darkness of ignorance.

If you want to turn to the Archangel, you don’t have to look at his image. The image is just a picture, although it has a certain sanctity. The icon helps to detach oneself from the world and to tune in to a conversation with Higher powers.

Since this Archangel is considered the patron saint of Russia, each of the residents of the country can turn to him for help. Those who want to find a purpose in life or direct their loved ones on the right path can also pray to Uriel. It’s also good to turn to the Archangel if you are sad and depressed or if you think about death.